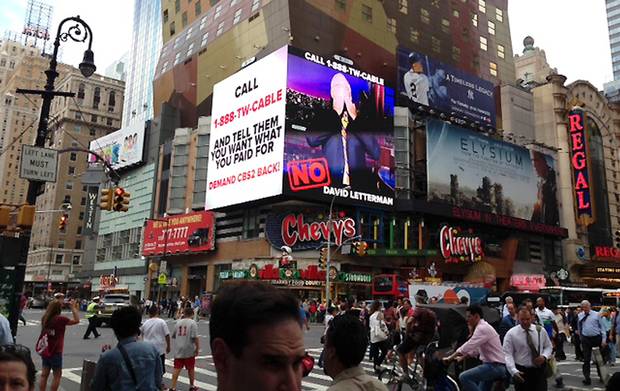 as day three of the CBS / Time Warner stand off dawns, both sides are maintaining that they’re in the right … meanwhile three and a half million Americans are going without Hawaii Five-0.

for both sides the equation is clear … for CBS, how much do I need to extract from TW (and other distribution points) to cover with margin the cost of content. for CBS, how much can I justify paying for content given the revenues I can generate via people paying for access to the channels on my network? what else is clear is that we can expect many more of these battles to come.

there are two constants … content and people. and its the changing and evolving relationships people have with content that’s causing disruption, instability, and war: War between the factions that create content and those that distribute it. the current siege of Time is only the current battle in the early years of a war that has a long way to go.

the origins go way back and the early battles have already been played out. battles like the UK’s independent production sector versus the country’s commercial channels, or the ongoing rumblings between music labels and Spotify. and at the start of last year Rupert Murdoch – via Twitter obvs – dramatically accused Google of being the ‘piracy leader’ of silicon valley.

the war will only get hotter from here on in. to understand why you need only follow the money. PWC’s annual Global Entertainment and Media Outlook 2013-2017 uses like-for-like, 5-year historical and forecast data across 13 industry segments in 50 countries to compare and contrast regional growth rates and consumer and advertising spend. this is the picture it paints for the coming years:

“Consumer demand for entertainment and media (E&M) experiences, fuelled largely by the adoption of broadband and connected devices, will continue to grow and we expect this growth to follow a similar trend to GDP development across the forecast period 2013-2017. However, given the shift towards digital media — typically lower priced than its physical counterpart — we anticipate spend to lag behind GDP growth.

The global E&M market will grow at a CAGR of 5.6% over the next five years, generating revenues in 2017 of US$2.2tn, up from US$1.6tn in 2012. Within this overall figure, all three sub-categories — advertising, consumer spend on content, and access — will continue to grow, but at varying rates.”

two really – really – important points. one, because of the shift to digital media, spend on E&M will lag behind GDP growth – the pot is shrinking in relative terms. two, whilst spending is anticipated to increase, the future isn’t evenly distributed:

shift is spending, in real terms, away from content and into access to that content (spend on advertising is holding stable). we’re getting used to paying not for content, but instead for access to that content. whether its Spotify versus iTunes, or HBO’s Emmy and now Cannes credibility, it’s the distributor-networks that are currently strategically placed to gain the most.

but the thing is that the really big changes haven’t even started yet … there’s still a ton of inertia in TV advertising investment – big brands still, I think overly, rely on TV networks to get 30″ messages in front of people. reach is important, but its a necessity not a strategy for communications planning. brands have played for a long time now in being content creators, but they’re only just learning the power of being their own distributors …

new deals, new bargains, new negotiations … emerging between people and how they get access to content. if the old currency was attention through broadcast interruption, then the new currency is data through increasingly direct connections with people. the war was heating up without most major brands shifting even the smallest fraction of resource from broadcast advertising to creating and distributing content directly to people. the dual consequence – more competition for time spent with content and further reduced ad revenues – will see more than the three-day siege of a cable company.

there will be winners and losers, but perhaps the most notable victors in the coming war will be brands. marketing teams that successfully establish and then maintain direct relationships with existing and potential customers by creating and – crucially – distributing compelling and entertainment content.

featured image via AP, and the following for no other reason than because I can 😉